History Since the 1830s, when Michael Thonet began producing laminated and steam-bent chairs in Europe, manufacturers and designers have explored the design and economic advantages of "bentwood."

With growing worldwide interest in contemporary furniture, designers are again experimenting with wood-forming technologies to give their furniture lines a uniqueness to combat the leveling forces of globalization.

Designer/makers can build their own moulds or purchase a range or standard shapes/components from suppliers (see sidebar).

The term "laminated" refers to furniture components where the veneer's grain is uni-directional. In "formed plywood" the veneer's grain alternates. Curved components are created when muliple layers of veneer and adhesive are assembled in moulds and pressure is applied. A male and female mould [1] is typically used for production of larger quantities of laminated or formed-plywood parts. The mould is constructed from identical layers of routed (or CNC machined) synthetic panel material bolted together like a giant multi-layer sandwich held together with toothpicks. The male former mould [2] is used for short runs or prototyping.

The steel band former mould [3] is less costly to produce than male and female moulds and can apply considerable pressure to the glue line. The pressure hose mould [4] uses a flexible hose (fire hose is often used) to force the veneer against the main rigid former. (Any mould subjected to high pressure should be substantially constructed and inspected by an engineer before use.) For more information, see sidebar and Wood Bending Handbook (part B).

Solid wood steaming With the application of heat and moisture, solid wood becomes more pliable. In this state it can be shaped with the aid of various types of jigs that allow pressure to be applied until the wood cools and/or dries. Pliability is achieved by placing the wood in a "steam chamber" and subjecting it to saturated steam (100 degrees C) at atmospheric pressure. As the best results are obtained with wood that is thoroughly heated, apply the heat for about two minutes per millimetre of thickness.

To produce a common U-shaped bend, sandwich the steamed component with a flexible steel strap and make the assembly taut by applying pressure with adjustable end stops. Then centre the assembly on the crown of the form and use the two handles to bring the component to the final position, as shown in the diagram above. For more information, see Wood Bending Handbook (part A), Bending Solid Wood to Form by Edward Peck and this YouTube video.

Steam-Bending Instruction Booklet published by Ottawa-based Lee Valley Tools. This 16 page pdf booklet provides an excellent summary of the process and valuable information on the use of metal strapping and compression end stops to achieve small radius bends with minimal tension fractures.

Canadian report Curved Plywood - Report 177 by D. G. Miller. Available in a few Canadian libraries, this (1962) Department of Forestry twelve-page report gives a brief overview of the application of "bonded curved plywood" in the furniture industry. 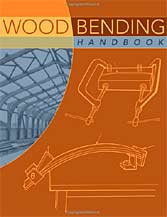 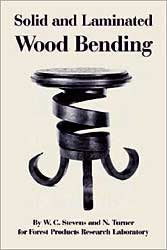 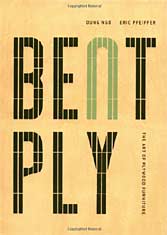