Since the nineteenth century, furniture makers have chosen hardwoods for their aesthetic values and mechanical strength. The proliferation of maple, oak and cherry in southern Eastern Canada and Eastern American States resulted in the establishment of many smaller-scale factories close to the source of their raw materials.

More genetically evolved than softwoods, hardwoods have additional types of cells, including long-tubular tracheids/fibre-tracheids, thick-walled needle-shaped fibre cells (to provide the tree's support), conducting vessels, variously distributed parenchyma cells, and ray cells wide enough in some species to be seen easily with the naked eye. The fibre's vertical orientation with the trunk explains the high bending strength of hardwoods "parallel with the grain direction" and its susceptibility to splitting "perpendicular to the grain direction."

On the cross-section of the trunk or "end grain," vessels are often called pores. Oak, elm, ash and other hardwoods with large pores in concentric earlywood bands are termed "ring-porous." Those without this feature, such as birch, maple and alder, are termed "diffuse-porous." The chart

exceeds alder and is on par with cherry and birch. (Cutting softwoods radially will help increase their impact resistance.) Traditional furniture makers cut their hardwood logs radially to produce decorative "figure." This conversion method (see diagram below) is often employed for white oak and other hardwoods. This feature is a consequence of slicing almost vertically through the broad and multi-celled rays (see diagram below, radial/surface section).

Conversion methods (above), typical 3D view of hardwood with broad rays (below)

is derived from near-perfect wood samples. In reality designer/makers should make allowances for knots, grain angle and direction, other defects and variabilities (below). This page

shows how the various tests listed in the properties chart are performed and the source of the data.

Because of its high bending strength many hardwood species are ideal for shaped "laminated veneer" components. furniturelink provides more information about this property that allows for small radii bends and steam bending (softwoods are not as easily formed).

Trunk cells provide two functions as the tree develops - the centre heartwood cells lend support, and the outer ring of sapwood cells conducts food to the leaves. "Extractives" (minerals, waste, tyloses, etc.) accumulate in the heartwood of many hardwoods, which often makes it darker in colour, slightly denser and less prone to shrinkage or expansion. The sapwood band in mature trees varies in width from two to four cm. in cherry and up to fifteen cm. in birch and maple (1). Though sapwood has the same mechanical strength as heartwood, it is not resistant to decay, so is unsuitable for the production of patio furniture.

Trees growing on steep mountain sides (not uncommon in Canada) have an eccentric trunk shape when viewed on the cross-section (see diagram above). In hardwoods this "reaction" wood is called "tension" wood and "compression" wood in softwoods. A pronounced fuzzy surface when planing, blotchy colour and unexpected longitudinal shrinkage are signs tension wood is present. (In softwood compression wood causes reduced strength, brittleness and shrinkage.) 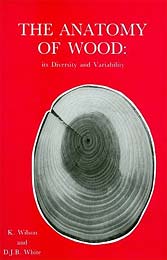 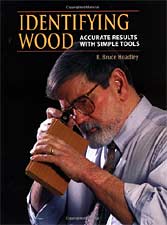 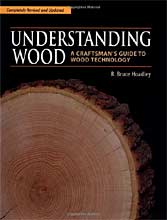 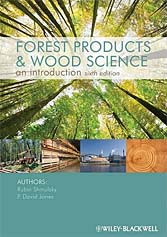