And music stands, coffee tables, chests of drawers and end tables - all made by BC fine woodworkers, all passed the stringent quality and marketing criteria of Northwest Fine Woodworking (NFW), the renowned Seattle co-operative.

NFW was founded in 1980 by a group of designer-woodworkers to sell their work to local clients at a modest commission. Now with 28 member-shareholders and over 300 non-member "associates," the co-operative sells their work on consignment through several outlets in the Seattle area. The co-operative board and technical jury that evaluates work for acceptance are drawn from the 28 members. Members pay a commission rate of 32 per cent on sales and non-members 40 to 45 per cent. 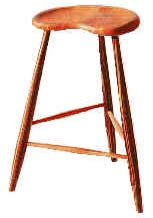 For woodworkers to be accepted by NFW, high-quality wood must be used in designs that are innovative, and not a direct copy of other work, with joinery and finish technically perfect. Products should fit into the broad category of contemporary, and pieces with a small "foot-print" (occupies minimal floor space) will be looked on with extra favour.

When their original store doubled its floor area in 1990, cash-flow problems developed because of poor marketing and inventory control procedures. In 1992 NWF hired Christopher Brooks as director and he immediately set about clearing back inventory and impementing sales and marketing strategies focussed on the "customer" (target customers are aged 32 to 45 from households earning more than $150,000). The store continues to prosper under his guidance, and plans are underway to open another 5,000-square-foot store in May 2000, projecting a further growth of 25 per cent.

On two recent tours of BC - one to the Kootenays and one to Haida Gwaii - Brooks signed up several woodworkers including Andre Arajs and Jose Botelo of Hand & Soul in Silverton, producers of the stools featured here. Other BC woodworkers on their books include Jeoff Greenup, Michael Moore, Ken Guenter, Richard Law and Tom Scotcher.

The success of NFW was built on a long period of sweat-equity by the founding members and survives today because of a skillfull and dedicated director, sound business plan and a commitment to the highest standards of technical expertise and design. As several attempts have been made over the years to establish a similar woodworkers "gallery" in BC, local iniators need only look to the Seattle enterprise for an excellent model.

furniturelink thanks Joel Russ of Kootenay WoodVine and Christopher Brooks for their contributions to this article.

update: In January 2012, the gallery launched as Northwest Woodworkers’ Gallery and relocated to 2111 1st Ave, Seattle.