Niels Bendtsen told VCR (now furniturelink) that "sales of contemporary furniture is skyrocketing" in the United States and Canada. Russell Baker, director of Bombast Furniture Ltd. in Vancouver, reports similar increases in sales of its contemporary line of sofas and side tables, much of it into the United States. 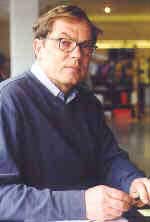 Principal of Inform Interiors in Vancouver employs more that 30 people in his manufacturing plant and operates a retail showroom in Vancouver, with a second due to open in Seattle this fall.

Bendtsen was born in Denmark in 1943 but moved to Vancouver in the early 1950s. He returned to Denmark in 1972 to pursue his design education and to work for a number of European manufacturers.

His "Ribbon Chair" is included in the permanent collection of the Museum of Modern Art in New York.

He returned to Vancouver in the mid 1980s to take over the operation of Inform Interiors.

This classic sofa from Inform Interiors is an example of contemporary furniture that is selling well in the United States retail market.

Designed in 1998, it is constructed from steel reinforced laminated wood with brushed stainless steel legs. It is available in a wide range of European fabrics and leather.

As evidence that contemporary furniture is out-pacing traditional, Bendtsen points to the growing number of contemporary retail outlets opening in major American cities. "I know of a good dozen new shops [selling contemporary furniture] in New York [that opened] in this last year . . . and they are doing well. There used to be one major person in Miami - now there are eight or ten contemporary shops." He said the same is happening in San Francisco and Seattle. To explain this upsurge in modern furniture purchasing, especially by the 20- and 30-year-olds, he offers, " . . . finally this phoney, romantic thing is dying, and people are starting to live a contemporary life. It is becoming chic to be contemporary."

He also points to the resurgence of contemporary architecture and interiors in trend-setting New York where new restaurants and hotels exhibit a modern aesthetic. Although much of this expansion is in up-market fashionable SOHO, some department and discount stores such as Target, are increasing their lines of affordable contemporary furniture. In Canada, Sears plans to follow suit with contemporary interiors for the former urban Eaton's stores and by offering a new "millennium line" of contemporary classic furniture.

The success of Inform Interiors, Bombast Furniture Ltd., and a handful of other local design-led manufacturers in world markets is proof positive that "good design pays."