Data in the details

Love it or leave it, the North American Free Trade Agreement (NAFTA), in tandem with the falling Canadian dollar, has produced benefits for Canadian furniture manufacturing. In recent years NAFTA has spurred the introduction of the North American Industry Classification System (NAICS) data collection system and bolstered the dramatic increase in Canadian furniture shipments - illustrated in the graph and outlined in furniture future? (see below).

The NAICS furniture industry data published by Statistics Canada is more accurate and comprehensive than the old system. For example, a subcategory now lists BC household furniture shipment data (not previously available), showing that BC furniture production has not followed the positive trend as in the rest of the country (see issue #039). 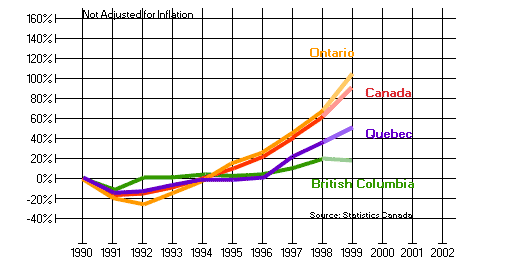 The office furniture manufacturing sector has shown the strongest growth of any furniture sector over the past decade. Office furniture shipments increased by almost 180 percent, surpassing the 120 percent recorded by the industry as a whole. Office furniture and household and institutional furnure each account for about 40 percent of the Canadian furniture industry, with the balance divided between kitchen cabinets, mattresses, blinds and other.

Between 1990-1996, companies with more than 500 employees increased sales by 22 percent, medium-sized companies stayed even and small companies (under 100 workers) saw their market share decline from 55 to 44 percent. Much of decline in shipments from smaller-scale producers are directly attributable to over 500 small factory closures - the Achilles heel of NAFTA.

Statistics Canada took advantage of the introduction of NAICS to overhaul the system "from the ground up" - data is now collected at the provincial level and accumulated to produce the national total.

Manufacturing shipment data is collected in two surveys: (1) Monthly Survey of Manufacturers (MSM); (2) Annual Survey of Manufacturers (ASM). The annual survey is more comprehensive and accurate because it uses a large sample size and tax records, though its publication is usually dated by two to three years. The monthly survey uses a smaller weighted sampling to produce timely data and is benchmarked to the ASM for accuracy. The chart below is derived from Statistics Canada NAICS 337 (dark lines represent ASM data and pale lines MSN data).

Note: This article was modified on May 22, 2003, to reflect Statistics Canada methodological changes for 337 data collection that were introduced with the 2000 reference year.