Making it - in London

Ten designers and design partnerships, all graduates of London Metropolitan University, displayed their work at the "non-theme" Making It inaugural exhibit for East End London's Furniture Works showroom. Exhibition curator John Miller chose Making It for the show's moniker because ". . . it refers to the capacity in talented designers to continuously innovate; to make new responses to familiar problems; to make environments and products work better for their users (and) to make new discoveries with every project." The eclectic range of products (including industrial design) represented design solutions that integrated aesthetics, practicality and fitness for the purpose intended.

furniturelink has assembled a small, virtual selection of the designs displayed at the show, which closed February 20. 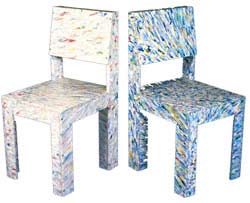 Jane Atfield designed and manufactured the RCP2 chairs in 1993, using a synthetic panel made initially from recycled polyethylene bottles. Included in collections at the Victoria and Albert Museum and Design Museum (London), the simple iconic chair forms give full expression to the material's qualities - colour, texture, and even smell - that celebrate the processes of recycling and manufacturing. Atfield's clients include the Conran Shop, the Earth Centre, Habitat, ProgettoModerno and IKEA. 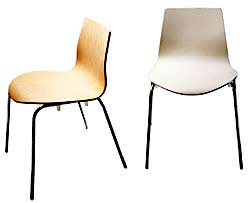 Designed in 2001 for commercial environments such as hotels, restaurants and public areas, Martin Ryan manufactures his Coffee stacking chairs at his own Licolnshire-based company. His philosophy is to "labour on the design, not the manufacture," which works in harmony with his company's reputation for cost-conscious high-quality products. 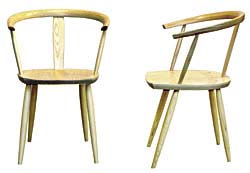 The 0015A ash Windsor chair is part of a new range of furniture for Ercol, where van den Broeche is design director. Well known for its traditional steam-bent ash and elm Windsor chairs since 1920, Ercol is a household name in the UK. Van den Broecke is currently working with Terence Woodgate and Fred Scott on new product lines for Ercol.

In tribute to the Belgian designer of the saxophone, Adolphe Sax, Terence Woodgate designed the Sax sofa for SCP in 2002. A freelance industrial designer of furniture and lighting, his greatest buzz comes from "seeing someone actually buying something I have designed. It beats getting one's work on the cover of any magazine." Woodgate's clients include Cappellini, Montina, Moroso, Casas, Punt Mobles and SCP.