In December 2003, Centro Sperimentale del Mobile (CSM), a furniture industry association based in Poggibonsi, Italy, invited furniturelink and other journalists from around the world to visit furniture and kitchen factories in Tuscany. Renowned for its "blend of culture and nature" throughout the centuries, Tuscany was showcasing its "Casa Toscana/Green Home" project, reflecting its twenty-first-century attitudes and responsibilities.

Similar to many regions around the world, Tuscany faces manufacturing challenges, including how to adjust to globalization with an industry dominated by small producers - their average furniture factory employs six workers - and how to protect the environment.

For small to remain beautiful and economically viable, Italy recognized the need for collective solutions. One of their solutions is "Green Home," a furniture eco-labelling program.

We want to make Tuscan furnishings production an opportunity to inspire the citizens' and the consumers' imagination with an image of Tuscany in terms of its historical, cultural and environmental quality.

The original Green Home concept formed in 1998/1999, through the coordinated efforts of Florence University, several Tuscan furniture manufacturers and CSM, which is supported by public funds (60%) and members fees (40%).

In August 2001, the venture expanded to include 15 manufacturers when funding was provided by the European Commission LIFE-Environment project to Casa Toscana, a trust established by Pisa, Siena, and Pistoria and the towns of Cascina, Ponsacco, Poggibonsi and Quarrata. Other partners include the University of Pisa, Polo Magona and the Italian Institute of the Environment.

Through this additional funding, manufacturers developed prototypes with reduced impact on the environment. Some of these prototypes, such as the Lips arm chair (below), are now in production.

Green Home encourages manufacturers to take the first step on the road to sustainability, a major success of this project. To date, the project has involved 35 furniture and kitchen cabinet manufacturers and continues to be supported by various partners. 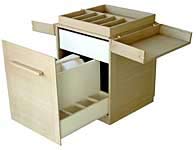 To eliminate the need for country-specific eco-labels the European Union (EU) is developing standards for a European furniture eco-label. On December 10, 2003, the committee assigned to draft the standards could not reach agreement on the final document. A main area of differing opinion is the content levels permitted for PVC and illegally harvested wood (see Greenpeace press release). This objection reflects the priorities of EU standards, which are primarily aimed at controlling the use of unsustainable and toxic materials, rather than Green Home's more comprehensive approach.

Although their objectives are similar, the EU-proposed label and the Green Home label differ in other ways. For example, the data applied by Green Home is specific to Tuscany, and includes transportation in its assessment criteria but excludes disposal criteria. For more details about LCA, see Tuscany Gauges Green. 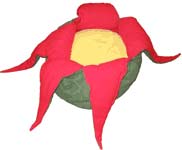 Prototype of a child's soft chair is designed by Florence University student Manuel Zoppi and manufactured by Halto. The outer layer of "petals" can be zipped open and closed to create many playful permutations. When closed, the chair can be used for toy storage. The outer fabric is cotton and the seat padding raw wool batting.

Tuscany has shown what can be achieved when government, manufacturers, organizations, and academics work cooperatively to add more green to their environment. Riccardo Remorini, Engineering Consultant to Green Home, explained the project as "just a small stone . . . just a beginning." This small start is an example for the world to emulate, especially North America.

Since May 2003, CSM has been working on establishing their "Design Network" to connect smaller-scale Tuscan manufacturers with professional furniture designers. The first group of ten designers from six European countries and their assigned manufacturers were chosen in October 2003.