Can retailers work directly with designers to develop new products, then source the manufacturer? The London-based trust Design-Nation conceived the Eureka project to do just this. Supporting 130+ of the UK's top designers with the aim of producing "commercially viable design products," Design-Nation began networking designers and retailers for Eureka in 2004 and has budget approval for 2005/2006.

The networking support provided by Design-Nation includes hosting meetings between designers and retailers, partial payment of design fees and design/business consultancy services. All the designers listed by Design-Nation were vetted by a selection panel of nine judges, including Jasper Morrison and other professionals from industry, education and the media.

In its first year, Design-Nation invited UK retailers Conran, Crabtree & Evelyn, Fired Earth Interiors and Heal's to submit design briefs for new products. Heal's was the only company to submit a brief for an item of furniture, which became the KOI computer workstation.

As designers know, a direct relationship exists between quantity produced and the final retail cost. Design-Nation director Peta Levi is dealing with this dilemma. In addition to seeking retailers with relatively large turnovers, Design-Nation is also encouraging smaller retailers to increase production runs by allowing their contracted manufacturers to sell the Eureka product outside of the geographical market of the sponsoring retailer. 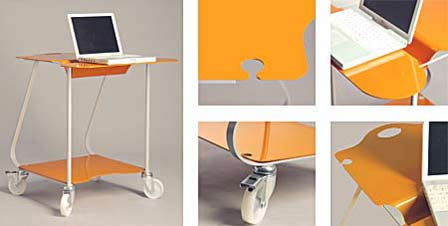 The KOI workstation (above), designed for Heal's by Beatriz Diaz Matud of BDM Design, was Eureka's first furniture project. Currently produced in relatively small batches, the KOI can be easily moved on its large nylon casters. Construction is of powder-coated sheet steel and tubing with a plastic extrusion running the length of one of the main supports/legs, which conceals most of the computer and power cables, and a triple power outlet is located under the bottom shelf. Available in white or orange, the suggested retail price will be £495.

The unit will be sold in the new Home Office Department of Heal's, where it will be joined by at least two other furniture items developed in-house by Heal's working with freelance designers. Since being purchased by the Weston group of companies in 2001 for £33.1 million (source) and converted from a public company to private, Heal's has been proactive in supporting innovative design and designers.

Levi told furniturelink that Eureka will likely be developing more furniture items when UK retailers John Lewis, Next and Debenhams join the project in 2005. furniturelink will provide an update then of this unique approach to the design-manufacturing process.

Beatriz Diaz Matud's company BDM Design specializes in the design of contemporary lighting and furniture for several European manufacturers. A selection of her designs are displayed above.