A visitor surveying the expansive ICFF 2005 display floor (and off-site locations) could clearly identify the furniture industries of Italy, Demark, Sweden and other countries/organizations - and wonder where's the maple leaf?

One tiny red icon was barely visible in the corner of a banner trumpeting "Hot Design. Cool Country." above Toronto's Design Exchange booth. Other Canadian manufacturers and organizations at ICFF made no obvious reference to nationality. The one collective effort to promote Canada appeared as a list of Canadian participants in an ad in the ICFF catalogue and on a general distribution promo card. Even this low-key approach indicated some anomalies - one listed manufacturer displayed products made in China, and some with display booths chose not to be listed in these materials.

However, it would be a mistake to surmise that the Canadian government did not attempt to match the promotional efforts of competitor countries. Two booths where manufacturers shared display space - BC Wood Specialties and Design Exchange - both benefited from government subsidies.

The promotional strategies of Canadian companies exhibiting at ICFF divide into two camps - those looking for instant media attention and those with long-term business plans. Rachel Gotlieb, organizer for the Design Exchange booth, explained that the selection jury (for inclusion in the booth) was seeking "show stoppers" to promote "cool" design. This approach often favours producers with the goal of "instant fame," as they view themselves as innovative and discount the qualities needed for longevity. (It should be noted that the design concept of "cool" dates back to Tony Blair's "Cool Britannia" hype of the 1990s.)

Definitely in the opposite, long-term camp, as evidenced by their sixth year as ICFF exhibitors (without subsidy), is Durham, Ontario-based Speke Klein Inc. Robin Speke believes, "From a business perspective, I personally don't think show stoppers are going to have the same effect, because a show stopper is very flash-in-the-pan." Earlier she commented, "We found (retailers) watch you for a few years, and then they will approach you when they see you have longevity and staying power, because they don't want to invest in somebody who is here today and gone tomorrow. They are looking for quality, professionalism and the ability to deliver what you've promised." 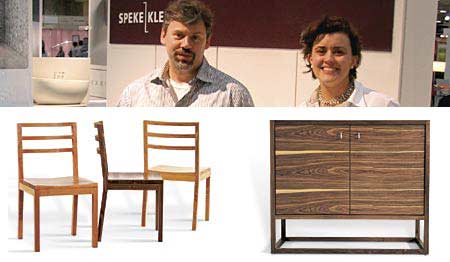 This dichotomy is likely driven by the exponential growth in design graduates from schools in Canada and worldwide. Often these inexperienced designers present only raw prototypes or computer-rendered "virtual" products at shows, such as ICFF, which design magazines and websites eagerly reproduce. It is a mystery why universities and colleges are contributing to this flash-in-the-pan syndrome by enrolling so many design students when the number of North American and European manufacturers is in decline because of globalization. Also, educational institutions are offering more and more academic and computer-centric courses that favour marketing-strategy thinking at the expense of practical, hands-on training essential for successful self-production or communication with manufacturers about technical specifications.

A recent report on the Norwegian design economy comments on their "cool/hip" design phenomenon by stating, "The tendency towards self-employment of designers, strictly out from college, may be detrimental to the promotion of the industry, since small one-person firms often lack the routines necessary in establishing a working relationship with their clients." (1)

Innovative, well-trained young designers need our support if Canada wants to maintain a viable manufacturing sector to compete with low-wage off-shore manufacturers. Instead of concentrating on virtual design, our young designers should team with established manufacturers to develop prototypes. These prototypes can then be fully tested and costed as preproduction models for presentation at trade shows, with the backing of the manufacturer's all-important longevity factor.

This concept is not pie-in-the-sky - it has already been successfully implemented in Québec and showcased at SIDIM, Montréal's Interior Design Show (see issue #064) - and could be used to effectively promote Canadian design and manufacturing at future ICFF shows.