Tree trivia: What cone-bearing tree is not forever green? What softwood can be as dense as paper birch? Kudos to those who answered larch.

The western larch (Larix occidentalis) stands taller and wider and is somewhat tougher than its cousin easterm larch (Larix laricinia). What the eastern species lacks in stature, it makes up for in geographic distribution. Western larch grows only in southern British Columbia and the northwest United States, whereas eastern larch grows across Canada (except for most of British Columbia and southern Alberta/Saskatchewan) and in the northeast United States. Tamarack is a common alternative name for both species (especially in eastern North America).

Western larch is similar in colour to Douglas-fir; eastern larch is paler, with a yellowish hue. The table above shows the physical properties of the two species, with paper birch as a comparison. Western and eastern larch are naturally resistant to rot, making both ideal for the manufacture of outdoor furniture.

The now defunct Sakatchewan Forest Centre published a technical report on eastern larch that attributes good working properties to the species, with the exception of rotary knife planing. Abrasive planing technology should eliminate the torn/raised grain encountered with traditional jointers/thicknessers, as the report rates eastern larch's sanding characteristics as "excellent."

Too-often relegated to construction grade status, larch was rediscovered and put to optimal use in two contemporary furniture projects described below.

In 2005, Christian Blyt, associate professor of industrial design at ECI, presented his students with a challenging design brief. Teams of three or four students had to design and produce outdoor furniture prototypes using western larch provided by Kalesnikoff Lumber of Thrums, BC. The students' experience machining their larch prototypes in the institute's workshop dispelled some myths about the working characteristics of the species. "The larch cut smoothly, with minimal chipping, routed cleanly and adapted well to oil finishes," explained Blyt to furniturelink.

The All Terrain Cabin (ATC)
Bark Design Collective, Vancouver, BC

A nomadic home built from the skeleton of a standard ISO shipping container, the ATC travels the world by train, truck or ship. The "cabin" carries and displays Canadian content - Canadian-designed furniture, fixtures, accessories and technology, including patio chairs, decking, T&G flooring and window slats made of western larch. 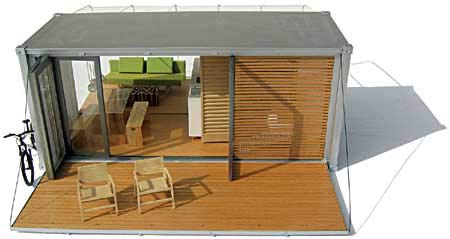