Growing up on and living up and down BC's West Coast, David Greig appreciates and knows the value of his forested environment. In recent years, he's added value to the precious local resource by designing and producing furniture for the discerning consumer.

Greig initially became interested in industrial design after reading Victor Papenek's book, Design for the Real World, in the 1970s. "That's what really turned me on to industrial design," he told furniturelink. He would eventually establish 260 Systems Inc. in the 1980s to design and manufacture upholstered acoustic panels for interiors and work environments. This work brought him into contact with many architects and designers and inspired him to start taking evening courses in design and drawing at Emily Carr Institute (ECI) in Vancouver.

In 1996 he enrolled as a mature student in ECI's full-time industrial design program for three years of study, including a term in 1998 spent as an exchange student at Creapole, a design school in Paris. "I learned a lot from the rigours of the French school system," Greig says of that time. 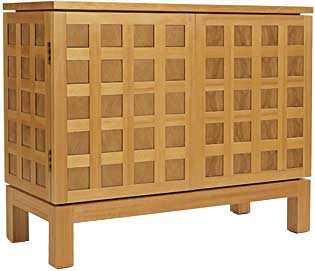 After graduating in 1999, Greig continued working with his 260 System clients so that he could finance the establishment of a workshop on his Salt Spring Island property (about two hours by road and ferry from Vancouver). His first designs from the workshop consisted of small tables and benches that he began selling in 2004 through architect David Hepworth's Vancouver retail outlet Small, Medium, Large. Private commissions and business contacts generated additional sales.

Greig relies mainly on local softwood species, predominantly Douglas-fir and hemlock, for his furniture designs. He ruminates, "Maybe I've been barking up the local tree a bit too long, but on the other hand I get a great deal of satisfaction creating high-value objects, such as the Pachinko cabinet, with material undervalued and underappreciated here." (Ironically, "Oregon pine" - the European common name for Douglas-fir - is highly sought by contemporary European furniture designers and manufacturers.)

To counter the inherent low density of most softwoods, Greig's designs often incorporate the end-grain surfaces of his chosen species to take advantage of its much higher resistance to wear and impact. Greig produced all pieces shown here in Western hemlock (Tsuga heterophylla) - flat and end-grain on the gables and doors of the Pachinko cabinet and exposed end-grain for the 30x30 table surface.

The colour of his furniture often appears darker than the virgin yellow/white 2x4s usually associated with construction timber. A combination of water-based coatings (from US-based Target Coatings) that Greig applies and the wood's exposure to sunlight results in the light tan colours in the items shown here.

Whenever possible Greig makes the effort to source his materials from the tsunami of premium-quality softwoods destined for export and rarely sold locally. He tries to be in the right place at the right time to access overflow materials from a container shipment or to bid on cancelled orders. Currently, he's developing a range of tables, from coffee to dining, with hemlock and Douglas-fir end-grain complemented by glass tops for aesthetic contrast and increased durability. 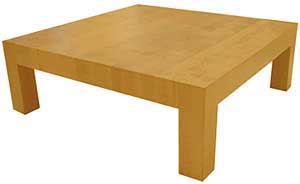 Future projects include collaborating with other furniture producers, as he believes design isn't a "one-person thing." He explains, "So many skill sets are needed to develop a product line. I would prefer to work on design prototyping and work with others on the production." As a longer-term goal, he'll be working to reduce the unit production cost of his furniture to develop markets in a wider range of retail outlets.

Furniture by West Coast's David Greig Design celebrates the aesthetics of Canadian wood - and the value of the source. Summarizing his furniture design philosophy, Greig says, "The objects and artifacts we create [as a society] and ultimately leave behind reflect our understanding and connection with the environment in which we live. I would hope that by proposing furniture of exceptional quality and original design, using indigenous wood species, I will help to develop a greater appreciation for these woods and, thereby, the forest itself." 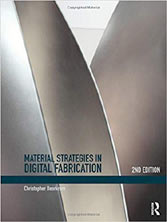