“ Without the hands-on workshop experience, it's virtually impossible to design objects in an informed manner.”

Andrew Rumpler demonstrates his "day-to-day contact and experimentation with materials" and love for inventing systems to solve problems in his modular furniture concept, Alex, named for his grandfather. An industrial design graduate from Rhode Island School of Design, Rumpler can't readily explain why he associated the aesthetics of his latest product with his grandfather, but granddad's photo features prominently on the Alex page of Rumpler's website, Nine Stories Furniture.

Rumpler designed Alex to be flexible without sacrificing stability. "There's no reason a kitchen table has to stay the same size from one year to the next. For that matter there's no reason that same table can't become part of a bookcase at some other point. I think good design should encourage people to play, to explore. If someone uses Alex in this way — the way it was intended — they become part of the design process."

In 2007 Rumpler moved his New York Eastside studio to the Brooklyn Navy Yard Industrial Park, an eclectic mix of designer/artist studios, small manufacturers and suppliers. Like the products he designs, he adjusts his workspace to the needs of the task by making sure his woodworking and metalworking equipment stay portable. Nor does he permit technology to dictate his creativity, believing that using the right machine may be important but "not as important as learning to work without [it]."

In 2011, the first year for Wanted Design, Rumpler displayed a sculptural piece called Tatum's Lounge, along with the work of several other designers represented by Voos, a Brooklyn-based furniture showroom. Encouraged by this positive experience, he decided to go solo and exhibit Alex at the 2013 show.

To produce Alex, Rumpler cut the different connectors from square aluminum extrusion, used TIG welding where needed and applied natural, polished or white enamel finishes. He machined the brass adjusting screws (available in a natural or black finish) on his recently acquired metalworking lathe made, circa 1947, by the iconic American machine tool company, Logan Engineering. A brief video on Rumpler's website shows him using some of the metal and woodworking processes to produce a bar stool, another recent product prototype. 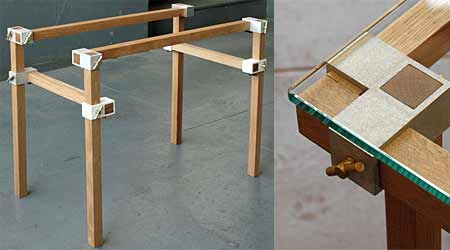 Though somewhat disappointed with the results from the 2013 showing, he explains philosophically, "As a designer who's drawn to subtlety, I have to accept that certain things I do just aren't going to attract much attention. That's what happens when you exhibit in a show with a lot of good work around you: there's a chance you won't get noticed. Alex is very subtle, both in the colour palette and the skeletal way it occupies space."

Undeterred, Rumpler continues to promote Alex on his website through videos and his online store. His website also invites and challenges the customer to get creative with Alex, with Rumpler offering to give tips on how to do that and sharing the hands-on workshop experience.