“ Products should be intuitive, and the use of them should feel completely natural. I want to create work that will last a lifetime, work that is of the highest quality craftsmanship and design and, above all else, evokes a true connection with the owner.”

Tyler Russell at a young age enjoyed making things from scratch using raw materials and pursued this interest in his education. One of the younger exhibitors at Wanted Design, Russell earned his BA in industrial design from the Milwaukee Institute of Art and Design in 2011.

With only a few months to decide what to show in New York, Russell developed Tre, a modular furniture system prototype named after its three-legged structure. The idea sparked from needing to convert an old solid wood door into a work table. After numerous experiments he decided on a simple three-legged trestle that could accommodate both rectangular and circular tops (F1). "I'm always really drawn to [the trestle] because it's the minimum you need for a stable base."

(F1) Initial trestle design for use with a worktop

The design process for the trestle "hinge" needed the most development time and involved both hand-tool fabrication and CNC machining of full-sized wooden models. Russell presented the resulting design as the Tre shelving system, with natural pine shelves and wooden structural components painted white to mimic a range of materials (F2, F4) — a logical extension of his original table trestle concept.

Based in Austin, Texas, trumpeted by the city's Chamber of Commerce as "the top [US] destination for migrating talent," Russell further explains the phenomenon. "There's a really great entrepreneurial thing here right now. A lot of people are coming here from California or New York because it's easier to get things made and get things going with a new business." And thanks to Austin's boom, Russell can access 17,000 square feet of workshop space at TechShop (with branches in six other US cities) and share work benches, hand tools, power tools, manufacturing equipment and computers loaded with Autodesk software.

By exhibiting at Wanted Design, Tyler hoped to find a manufacturing partner to help develop his idea into a commercially viable product using aluminum as the most suitable material for the structural elements. Although he didn't connect with any manufacturers, the advice and encouragement he received at the 2013 show spurs him on. 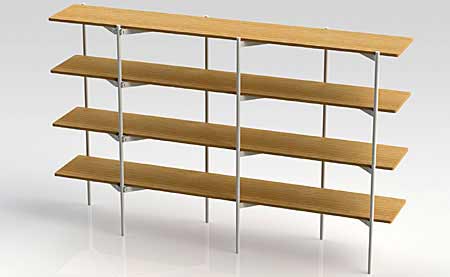 Since returning to Austin post-exhibition, Russell continues to work in his own design studio, Tyler Russell Design, and pursue quotes from various manufacturers for Tre. His most promising Wanted Design contact, someone with considerable experience in aluminum fabrication, suggested that the "entire product (hinge and tubular components) could be extrusion moulded." The welcome insight prompted Russell to reflect, "You never know what you'll get going to these shows."