A passion for natural materials and the environment

As part of London Design Festival 2015, the Victoria & Albert (V&A) Museum transformed one of its grand staircases to showcase Robin Day's designs in wood to mark the centenary of his birth. Regarded as "one of the most significant furniture designers of the 20th century," (1) Day also worked in a wide range of other materials.

Exhibit curator Jane Withers demonstrated Day's passion for hands-on experimentation and the environment by including personal objects, tools, drawings and five of his (mainly) wooden chairs. Three of the chairs date from Day's early career and two from much later.

Although Day appreciated the natural environment — as an honorary member of the Alpine Ski Club, he climbed Mount Kenya at age 76 — he also found satisfaction working with non-natural materials. In 2005 he told Icon Magazine, "I'm probably happiest about my work in the contract field." (3) However, a few years earlier he had said, "I greatly enjoy working in timber. Unlike synthetic materials, it has unpredictability, an infinite variety of texture and pattern, smells good when worked and is sympathetic to the touch — it has soul." (4)

Day grew up in a modest working-class terraced house in High Wycombe, 30 miles west of London, surrounded by woodlands of beech, elm and ash, the raw resources for the local furniture industry. His daughter Paula saw her father immersed in a culture "where there was sharp awareness of the need to be frugal and creative with resources of all kinds."

She continues, "In the expanding economy of the 1960s he never embraced the 'throw-away' culture — his polypropylene chairs were designed to last. And when the environmental movement of the 1970s began to voice concern about the finite resources of the planet, he immediately identified with the thinking behind this. Perhaps he saw the earth in much the same way that he'd learned to see the little house in High Wycombe when he was a boy — a place with precious limited resources that should be used in a careful creative way so that everyone can continue to lead a good life together." (5)

From a young age Day showed a natural aptitude for drawing and enrolled in the local technical institute in 1928. Three years later he went to High Wycombe School of Art (now Bucks New University), where he learned cabinetmaking, chairmaking and metalwork. In 1933 a local factory producing cheap domestic furniture employed him as a draftsperson while he continued taking art classes at night.

About this time Lucian Ercolani, founder of Ercol Furniture Ltd., offered him a well-paying position. However, having received a scholarship from London's Royal College of Art (RCA), Day declined. Later he reconnected with the company.

At the RCA he met his wife, Lucienne, an equally acclaimed designer in textiles. After he graduated in 1938, the Second World War put his career on hold.

After the war he taught at Beckenham School of Art. There his colleague Clive Latimer (also a furniture designer) made him aware of a low-cost furniture design competition in 1948, sponsored by New York's Museum of Modern Art (MoMA). The two designers' joint entry of a range of sectional storage units won the $5,000 first prize in the storage category.

Although the MoMA-awarded design didn't go into wide-scale production, Day's studio benefited from the publicity. In 1949 Hille invited him to design a dining table, chairs and sideboard that "contained echoes of the MoMA storage units." (6) This began a long and close relationship with the Hille family and company. They produced Day's designs from the early chairs through to a wide range of seating and storage furniture over three decades, until the company ran into financial difficulties and was sold in 1983. 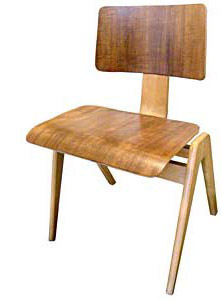 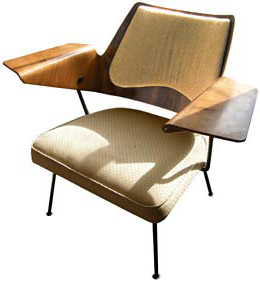 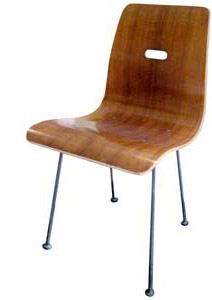 After the sale of Hille to a series of new owners, Day's main biographer, Lesley Jackson, wrote that Day "felt 'out of sync' with the furniture industry" (9) in the 1980s. However, the 1990s brought a revival of interest in his work, with proposals to reintroduce some classic designs by London retailers Twentytwentyone and Sheridan Coakley's SCP. New commissions included furniture for Italian manufacturer Magis (2005), the wood-framed West Street chair for London's Case Furniture Ltd. (2006) and the two wooden chairs shown below.

The story behind the Onetree (or one tree) chair project embodies a certain symmetry. The project required the almost 70 artist/designers involved to produce objects from one oak tree. Day sent his allocated part of the tree to be fabricated at Ercol's prototype workshop in High Wycombe — the same company he declined to work for in the late 1930s and instead enrolled at the RCA.

Childsply Chair, 1999
Plywood with birch veneer. The children's furniture design brief from London retailer Twentytwentyone required submissions be made from one sheet of birch-faced plywood. Day's solution allowed for two chairs per sheet. 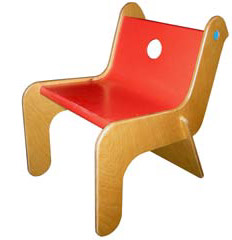 Onetree Chair, 2001
Solid, turned and steam-bent oak sourced from a diseased tree felled at Tatton Park, Cheshire, in 1998 for the Onetree project. Manufactured in the prototype workshop of Ercol Furniture Ltd., High Wycombe. 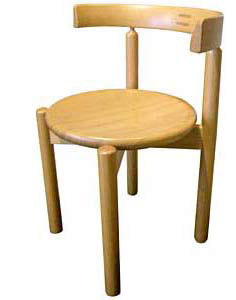 After her parents died in 2010, Paula Day discovered unscrupulous copying and exploitation of their work. To protect her parents' legacy, in 2012 she established the Robin and Lucienne Day Foundation, a non-profit educational charity, with a volunteer board of trustees.

At a 2014 panel discussion at the V&A, she recounted that "from the 1950s to the 1980s he worked almost exclusively for Hille . . . and all those decades he worked without written contracts on the basis of mutual respect and trust . . . my parents didn't even have a lawyer. So he was ill-prepared to protect his classic work when other companies (of varying moral integrity) approached him in his last decade." (10) (5)

To date a sample of the foundation's activities includes registering the name Robin Day as a European Community Trademark, endorsing a list of authentic manufacturers for designs by both Days and establishing an annual prize for ethical and sustainable design.

Thanks to these efforts to preserve and celebrate the Days' talents and expertise, designer/makers around the world can count on an important legacy to inspire their own work.