Serious satire on the sand

Faced with the overwhelming number of events at London Design Festival 2015, how did furniturelink's publisher respond? He fled out of town to the seaside but without his bucket and spade!

The exhibit generated a lot of media hype that failed to fully prepare furniturelink's publisher for the all-senses-on experience. He felt forewarned of Banksy's notorious political viewpoints and satire but didn't expect the encounter with an outstanding collection of art works. Banksy invited 50 artists from 17 countries to contribute their art to his seaside "theme park" (Banksy included 10 of his own works).

While the publisher walked the expansive 2.25-acre site, he realized the packaging of the "serious" art on display could disorient the viewer. Banksy himself acknowledged in an interview on his website (now removed) "I suddenly realized the whole premise was wrong; I'd pushed it too far and it had gone from being a pretty good art show to a very substandard amusement park."

Despite Banksy's admitted shortcomings about his concept, furniturelink saw hundreds of visitors adjust their reality to the Dismaland environment. They encountered and interacted with the art, absorbing experiences that no "normal" art gallery could duplicate. 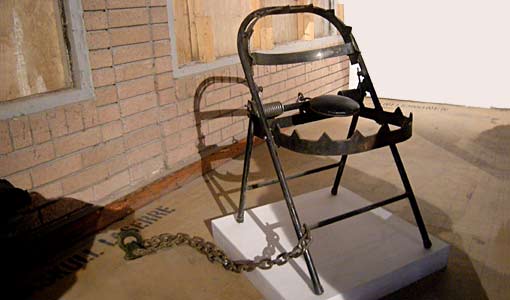 The site and enclosed gallery spaces even included examples of furniture made by two artist/designers — a chair to challenge our views on animal trapping and benches to make us question the everyday objects around us while providing a place to rest.

Montreal-based Maskull Lasserre exhibited his Progress Trap (Chair No.1), which he produced while artist-in-residence at the California College of Art in San Francisco. Describing the week he installed several of his works at the Dismaland site, he commented to furniturelink, "Spending that time in its walls really affected how the reality in the rest of the small seaside town was perceived — nothing could be trusted for what it was."

Echoing Banksy's comments, he added, "The force of the overall message of the project really co-opted the meanings or intentions of the individual works. It was difficult to read anything as saying anything different or more nuanced than the singular thesis of the Dismaland brand. This is testimony to its strength, but the experience might also have been more shallow than absolutely necessary." 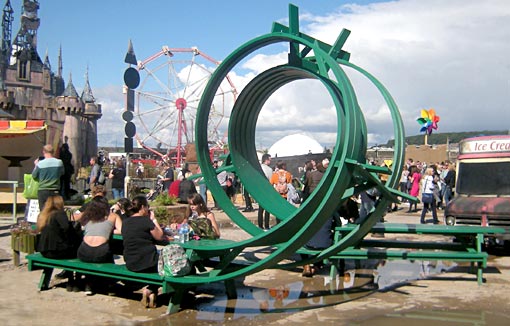 Michael Beitz, based in New Mexico and a studio in Wisconsin, furbished the site with two pieces: Picnic, his corkscrew-shaped green bench, and Roll, a white bench with a toilet roll extension that he described to furniturelink as "a response to aquatic/human waste issues." In Dismaland's official catalogue he challenges the viewer to ask why "we don't have time to stop and look at the objects we rely on for almost every aspect of our designed lives." 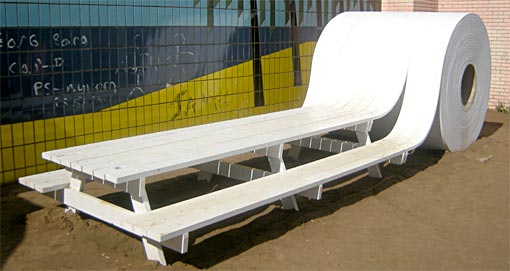 In an email to furniturelink Beitz offered his opinion that Dismaland touched on "some very important and difficult subjects that might not be possible in other contexts." Although he also mirrored Banksy and Lasserre's concerns about visitor expectations, he commented that "it also created an opportunity for many different types of work to mingle and to be viewed together, much differently than the cliché white-cube art experience. Loved it!"

As did furniturelink and thousands of others who won't soon forget their day out at Dismaland.