In a world fixated on low-cost global manufacturing, the London-based furniture company SCP Ltd. exemplifies the alternative — local production of local designs. Starting the business over 30 years ago, owner Sheridan Coakley continues to manufacture an impressive range of products for his retail outlets.

In the process he helped establish the careers of several designers. Six of them exhibited their sofa designs at SCP's Shoreditch store as part of London Design Festival 2015. 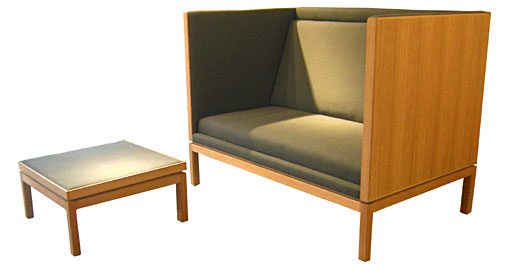 Michael Anastassiades — Known mainly as a sculptural lighting designer, Anastassiades used cabinetmaking details in his debut oak-framed Rochester two-seat sofa and footrest. In 2015 he told On Office Magazine, "I wanted to explore that sense of informality and formality in a sofa," which he achieved with his private and comfortable enclosure.

Konstantin Grcic — Trained at the John Makepeace School and the Royal College of Art, Grcic operates his studio from hometown Munich, Germany. Originally made for SCP in the 1990s, Grcic adapted his Pasha armless sofa with an elasticated webbed base topped by two padded ribbed surface cushions secured by a steel bar.

Lucy Kurrein — After graduating from Buckinghamshire University, Kurrein worked for Matthew Hilton before establishing her own studio in 2013. With its hammock-like features, her Tepee sofa allows the fabric and cushions to move freely with the user. Cylindrical oak legs support the solid oak frame, sprung seat and densely-filled duck feather cushions.

Terence Woodgate — Recepient of the RDI award in 2013, Woodgate retrained in the 1980s as a furniture designer at the London Guildhall University. The seamless form of his hardwood-framed Linear sofa incorporates zig-zag springs, jute webbing, hessian straps, other natural fibres and flanged aluminium legs.