1976 Vancouver view on design for humanity

Leap year 1976 ushered in nuclear tests in three countries, U.S. President Jimmy Carter, the Concorde, Apple computer and UN Habitat conference in Vancouver, Canada. On a much humbler scale, students in the short-lived Design Research program at the Vancouver School of Art (now Emily Carr University of Art + Design) designed and built an exhibition in support of Habitat.

The first United Nations Habitat Conference on Human Settlements (full title) comprised two components: formal sessions in downtown Vancouver and an alternative "voice of the people" forum a few kilometres west in an abandonded WWII seaplane base at Jericho Beach.

From May 27 to June 6, 1976, the main UN event focused on "The improvement of the quality of life of human beings is the first and most important objective of every human settlement policy.... Creating possibilities for effective participation by all people in the planning, building and management of their human settlements ...(1) 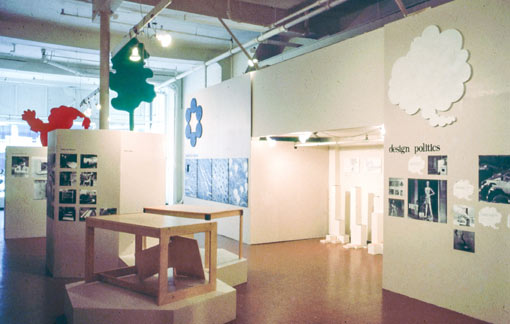 At the Helen Pitt Gallery on West Pender Street, the Design Research exhibition echoed the environmental and social aims of Habitat. The exhibition poster declared, "The industrial designer is part of the manufacturing process and therefore shares direct responsibilty for bringing our technology under control ... Design Research curriculum is orientated towards the concept of local production of essential industrial products, but within a scale that our environment and society can support."

Learning aids for children with dyslexia

One section of the exhibit showed how students studied the operation of local saw mills, participated in producing rotary-cut veneer for a formed plywood chair, laminated wood panels for a desk and layered plywood for a folding table. Many products in the exhibition featured the local wood species red alder (Alnus rubra), considered a weed species despite its important ecological role in adding nitrogen to soil.

The Habitat forum also showcased the use of "waste" wood, with an on-site sawmill that produced 450,000 board feet of lumber from beachcombed logs for the construction of building interiors, stages, tables and the world's second-longest bar for the event.

Today another UN conference dominates the world's agenda. The 2015 Paris-based United Nations Framework Convention on Climate Change agreed on actions to combat climate change and ratified them in 2016 — the 40-year anniversary of Habitat '76.

An archive of images, films and documents from the Jericho forums to the Helen Pitt Gallery show the relevance of a hands-on, design-led approach to solving global problems. Over four decades later, these legacies continue to inspire the radical change in thinking necessary for humanity's sustainable future.

+ Back issues of Jericho newspaper:

"Forum's use of wood could be blueprint for future scarcity," Georgia Straight, May 27-June 3, 1976