In the depths of suburban West Dulich in south London, wooden sheds in the rear garden of an unassuming residence accommodate The British Vintage Wireless and Television Museum (BVWTM). A visit to the museum's 2019 open house inspired furniturelink to explore the often overlooked connection between the modernist movement in the 1930s and radio cabinet design.

A group of pioneering designers exploited the introduction of phenolic resin for plywood manufacture and veneering to create a range of consumer products without precedent. Supported by modernist architects, artists, writers and critics, the designers rejected the romantic aspect of the early Arts and Craft movement. They sought ways to harness industrial production to promote a more egalitarian society.

An early proponent of modernism, mass-production and the industrial design profession, Gordon Russell mixed upper-class conservatism with revolutionary design. Growing up in Broadway, Worcestershire, Gordon and his brothers Dick and Don combined their entrepreneurial energies to help develop their father's business. Russell senior owned the Lygon Arms Inn, which the sons transformed into a boutique hotel decades before the idea became trendy. The wealthy locals and American tourists who frequented the inn became customers for spin-off ventures in antiques, furniture repair, a London retail store and eventually a modern furniture manufacturing facility that evolved into the company Gordon Russell Ltd.

A self-taught designer, Gordon sought out the work of craftspeople of the Cotswold School such as Ernest and Sidney Barnsley, Ernest Gimson and others. In one of her books, design historian Tanya Harrod makes a link between Gordon's prize-winning walnut cabinet at the 1925 Paris exhibtion and Gimson's work.(1) 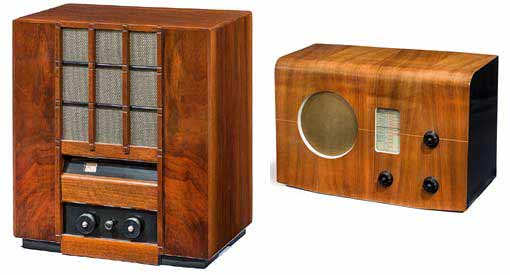 The decision in 1924 to send Dick Russell to the Architectural Association (AA) school changed the company's dynamics,(3) and Gordon "gradually retired from furniture design" after 1930.(4) Dick's return to the company coincided with a severe sales slump caused by the 1929 Wall Street crash. Fortunately at about the same time (1931) Frank Murphy and Ted Power from Murphy Radio came looking for new cabinet designs. The partnership resulted in Dick and Gordon Russell designing the Murphy A3 radio in April 1931,(5) put into production by June.(6) Combined with subsequent orders from Murphy and other manufacturers, "radio production kept the company [Gordon Russell Ltd.] afloat."(7) 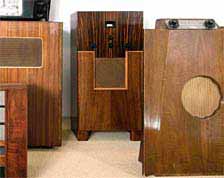 Described by the Guardian in 2002 as "Britain's foremost architectural historian,"(8) Nikolaus Pevsner developed a close relationship with Gordon Russell and his company. A Pevsner lecture in 1935 so impressed Gordon that the next day he offered him a position as buyer for his London retail outlet. Pevsner excelled at this appointment, which lasted until 1939 when he left for a more literary opportunity.(9)

Pevsner's connection to radio design started with his first academic assignment after gaining asylum in Britain from Hitler's Germany in 1934. The assignment involved an 18-months' survey of industrial design in England, and resulted in An Enquiry into Industrial Art in England, published in 1937. In the book Pevsner criticized product design in his adopted country, stating "90 per cent of British industrial art is devoid of any aesthetic merit."(10) He noted Murphy and Ecko radios as exceptions, extolling them "the best wireless [radio] cabinets in England."(11)

Later in 1940 Pevsner wrote about the history of radio cabinet design in The Architectural Review. He said, "R.D. Russell's cabinets are pieces of modern furniture first and foremost, Chermayeff's(12) and Wells Coates's designs for Ecko appealed to the engineering romanticism of our age."(13) 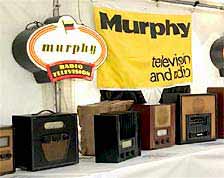 Dick Russell and Eden Minns, the two designers most associated with Murphy Radio, attended the AA school together from 1924 to 1927. On graduation they worked in the Broadway design office on numerous furniture and interior projects in the modernist style. Two other AA grads, Marian Pepler (AA 1924-29) and David Booth (AA 1925-31), assisted.(16)

In 1932 Dick Russell moved to London to be nearer to the Murphy Radio factory in Welwyn Garden City. He located his first studio in the basement of the Gordon Russell Ltd. retail outlet on Wigmore Street.(17) In 1934 Murphy Radio's sales outgrew the Broadway factory and they opened a new plant in Park Royal, west London.(18) This prompted Dick Russell to open his own studio on Vigo Street, London, in 1935.(19) Eden Minns joined him there in 1936.(20) 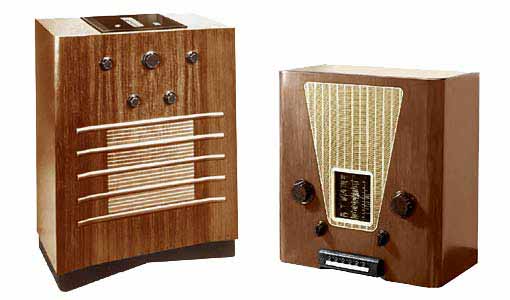 Russell's and Minns's radio, radiogram and TV designs "had considerable influence on the design policy of the whole industry"(21) during the 1930s, and the ubiquitous fretwork grill (Pye AC4D, above) "disappeared for ever."(22)

A decade later Dick Russell wrote in Design '46 that their experience working with Murphy showed the designer's importance on the production team, and without that contribution "the designing of a product must deteriorate into styling."(23) 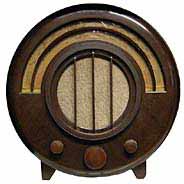 In this century the modernist's goal of equality appears more elusive than ever. Independent inns, such as the Lygon Arms, have become the preserve of international chains. Even conservative Gordon Russell expressed his frustration at corporate takeovers when a chain likely "washed away" the Roebuck, "one of the nicest pubs in Oxford."(24)

Writing in the 1960s, Pevsner looks back in his apolitical way to a unique decade cut short by the politics of war. He describes how a small group of radicals combined new technology and design-based solutions to challenge the economic and industrial status quo.(25) Though cabinets from that decade may now be collecting dust in museums, the modernist ideals of those designers can still inspire the world today.

In the words of architect Wells Coates (inset), "It is for architects [and designers] to invent, and to exhibit, a better architecture [and industrial design] which will quite naturally be accepted and demanded by the people, for the people, and of itself produce a finer society."(26)

Furniturelink thanks the following for their assistance with this article: 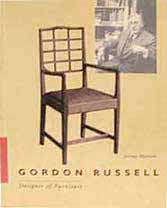 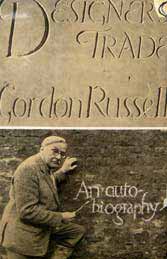 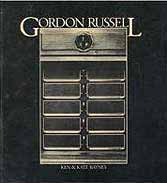 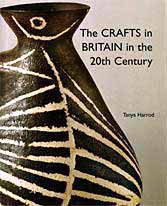 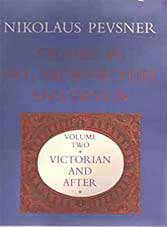 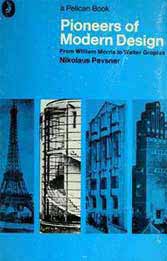 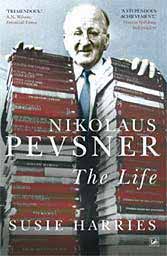 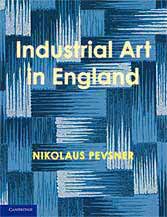 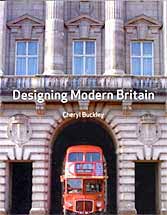 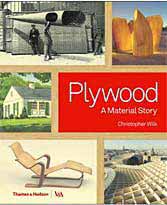 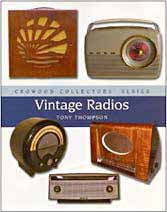 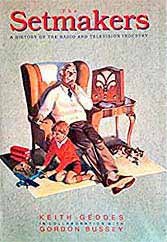 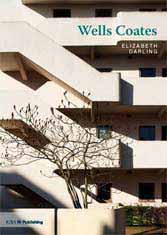 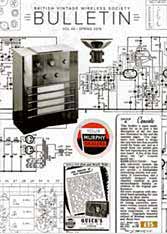